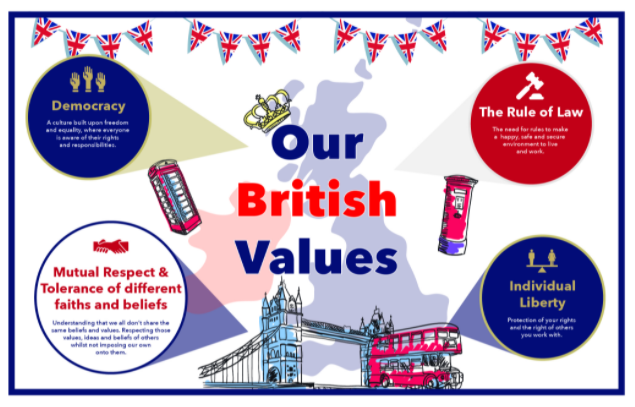 Fulwood and Cadley Primary School is required under section 78 of the Education Act 2002 to promote the spiritual, moral, mental and physical development of pupils. As of November 2014 schools also need to promote fundamental British values as part of the school curriculum.

Fulwood and Cadley Primary School is committed to serving its community. It recognises the multi-cultural, multi-faith and ever-changing nature of the UK. It also understands the vital role it has in ensuring that groups or individuals within the school are not subjected to intimidation or radicalisation by those wishing to unduly, or illegally, influence them.

It follows equal opportunities guidance which guarantees that there will be no discrimination against any individual or group, regardless of faith, ethnicity, gender, sexuality, political or financial status or similar. Fulwood and Cadley Primary School is dedicated to preparing pupils for their adult life beyond the formal, examined curriculum and ensuring that it promotes and reinforces British values to all its pupils.

Fulwood and Cadley Primary School does not have to promote or teach any particular belief, view or way of life that contradicts our outlook or ethos; however, we will not promote discrimination, or accept intolerance against people or groups, on the basis of their belief, opinion or background.

At Fulwood and Cadley Primary School we take pride in promoting a range of British values in line with the 2011 Prevent Strategy of:

Actively promoting the values means everyone challenging opinions or behaviours in school that are contrary to fundamental British values.  We use strategies within the National Curriculum and beyond to secure such outcomes. The examples that follow show some of the many ways Fulwood and Cadley Primary school seeks to instil British values.

Democracy is key to the children’s understanding of others and their rights in society. Democracy is embedded in the ethos of our School. Pupils are listened to by adults and are taught to listen carefully and with concern to each other, respecting the right of every individual to have their opinions and voices heard.  Throughout their school life there are times in which they can put themselves forward to take on extra responsibility within a clear system and to collaborate with each other.  Each year the children in each class decide upon their class charter and agree to a set of rules and responsibilities to follow throughout school. They have the opportunity to air their opinions and ideas through our School Council and regular questionnaires. The elections of the School Council members are based solely on pupil votes, reflecting our British electoral system and demonstrating democracy in action.  Children have an annual questionnaire with which they are able to voice their views about the school. Some of the children at our school take part in Rota Kids, which is another pupil elected committee that is run in school, but supports local and international issues and charities. Every term children complete questionnaires and hold interviews to put forward their views about the school. Any issues are then addressed by the senior leadership team and help develop the school action plan. As part of our values curriculum each year the school has chosen an elected charity to support. The children sometimes decided upon their own charity and plan events to raise money for their charity.

The Rule of Law

The importance of laws (whether they are those that govern the class, the school, or the country) are consistently reinforced at Fulwood and Cadley Primary School.  All pupils, teachers, parents and governors sign up to the Fulwood and Cadley Home Agreement when they join our school. These set out the school’s expectations for behaviour and attitudes to learning. Our Home School Agreement is regularly addressed in class and pupil expectations are communicated to the children. Pupils are taught from an early age the rules of the school. These are displayed in every classroom as part of a set of non-negotiable expectations. The school follows a clear behaviour policy for rewards and sanctions. These are communicated clearly to our children in the classroom environment.  Older children are given key responsibilities. They help enforce the rules of the school and look after the younger children in the school. Our children are taught the value and reasons behind laws, that they govern and protect us, the responsibilities that this involves and the consequences when laws are broken.

At Fulwood and Cadley pupils are encouraged to make choices and take risks, knowing that they are in a safe and supportive environment. As a school we support the children and provide boundaries to help our children make appropriate choices safely.  In Reception and Year 1 children are encouraged to be independent through the continuous provision areas. They learn through a play-based curriculum and the child’s interests are at the heart of the curriculum. This strand of independence is then developed and nurtured throughout the school in our themed skills curriculum, where pupils have an individual voice in their development through choosing how they are going to learn.  Through the PSHCE curriculum children are educated about making informed choices, lifestyles and about their rights and responsibilities.  Regular circle time gives children a chance to discuss issues as they arise and to reinforce the values of the school.

Whether it is through choice of challenge; of how they record; or of participation in our numerous extra-curricular activities; our pupils are given the freedom to make choices. We have introduced Forest Schools across our school to support our children in developing skills in managing risk for themselves through independent choice.

Mutual respect is at the heart of Fulwood and Cadley School. Our pupils learn respect for each other through the PSHE curriculum and the daily ethos of the school. Children learn that their behaviours have an effect on their own rights and those of others from a very early age. We expect all members of our school to treat each other with respect.  Respect is a core value of our school and is a strong theme within our assemblies. The children know and understand that it is expected and imperative that respect is shown to everyone and to everything. Throughout the year we celebrate a range of values, agreed by the school community that help to develop respect for one another and develop the ethos of the school. These are introduced through whole school assemblies and PSHCE sessions. They are displayed in each classroom and in the main halls in the school. RE lessons, ethos statements and assemblies and work in other areas of the curriculum highlight the differences between cultures around the world. We ensure there are planned opportunities for our pupils to learn about different faiths and their beliefs.

Tolerance of Different Faiths and Beliefs

Fulwood and Cadley Primary School has a diverse ethnic population. We feel it is important to celebrate this through assemblies and the RE curriculum. We follow a religious education curriculum that represents the main religions of our school.  We recognise the main religious festivals throughout the year. We enhance pupils understanding of different faiths and beliefs through our religious education; PSHE work and participation in celebrations such as Diwali and Eid. Our curriculum provides opportunities where pupils feel secure to explore, reflect, and develop curiosity and independence, whilst working collaboratively within a culture which respects each other’s ambitions. Leaders from different faiths are encouraged to come into school to celebrate the beliefs and the customs of different religions. We have a link with our local church, St. Cuthbert’s, where we have whole school celebrations such as our Carol Concert.

Fulwood and Cadley Primary deplores terrorism of every kind and of any radical ideology. We will do anything we can to protect our pupils from the threat of terrorism and will not tolerate extremism or radicalisation in our school.

We support and adhere to the latest guidance from the DfE which requires schools to actively promote fundamental British values and to ensure that pupils are encouraged to regard people of all faiths, races and cultures with respect and tolerance

What is the Prevent strategy?

Prevent is a government strategy designed to stop people becoming terrorists or supporting terrorist or extremist causes. The Prevent strategy covers all types of terrorism and extremism, including the extreme right wing, violent Islamist groups and other causes.

How does the Prevent strategy apply to schools?

From July 2015 all schools (as well as other organisations) have a duty to safeguard children from radicalisation and extremism. This means we have a responsibility to protect children from extremist and violent views the same way we protect them from drugs or gang violence. Importantly, we can provide a safe place for pupils to discuss these issues so they better understand how to protect themselves.

What does this mean in practice?

Many of the things we already do in our school to help children become positive, happy members of society also contribute to the Prevent strategy.

•Exploring other cultures and religions and promoting diversity and tolerance

•Promoting the spiritual, moral, social and cultural development of pupils, as well as British values such as democracy.

We will also protect children from the risk of radicalisation, for example by using filters on the internet to make sure they can’t access extremist and terrorist material, or by vetting visitors who come into school to work with pupils. We will carry out our Prevent duty in different ways, depending on the age of the children and the needs of our community.

How does Prevent relate to British values?

Schools have been required to promote British values since 2014, and this will continue to be part of our response to the Prevent strategy. British values include:

•The rule of law

•Tolerance of different faiths and beliefs

Isn’t my child too young to learn about extremism?

The Prevent strategy is not just about discussing extremism itself, which may not be appropriate for younger children. It is also about teaching children values such as tolerance and mutual respect. Our School will make sure any discussions are suitable for the age and maturity of the children involved.

Is extremism really a risk in our area?

Extremism can take many forms, including political, religious and misogynistic extremism. Some of these may be a bigger threat in our area than others. We will give children the skills to protect them from any extremist views they may encounter, now or later in their lives.

Extremism – vocal or active opposition to fundamental British values such as democracy, the rule of law and tolerance of different faiths and beliefs

Ideology – a set of beliefs

Terrorism – a violent action against people or property, designed to create fear and advance a political, religious or ideological cause